In Exodus, the second book of the Bible, God let His glory shine upon the Israelites and His powers make known in the land of Egypt. One of the most prominent events was the execution of the Ten Plagues that were meant to bring the Israelites out from under the yolk of the Egyptians. (Exodus 6:6-8, Exodus 10:1-2, Exodus 11:9)

This episode of the Ten Plagues shows that God is stronger than the gods of Egypt (even combined) by using their powers and challenged them to counter the attack. (Exodus 12:12)

The Ten Plagues of Egypt

I. The Plague of Blood

Summary: The Lord performed a miracle through Moses and Aaron by changing the Nile river into blood. Pharaoh did not believe so he gathered some of his magicians and, unfortunately, they did the same thing. The king of Egypt was furious. He didn’t let the Israelites go.

It was held in Goshen, the land where the Israelites live.

gods of Egypt: Khnum (Guardian of river’s source), Hapi (Spirit of the Nile), Osiris (the Nile was his bloodstream)

II. The Plague of Frogs

Summary: Seven days passed after the Lord struck the Nile. Moses and Aaron, once again, used by God to challenge the Egyptians into releasing the Israelites to worship their God. Frogs came up the land but the magicians of Pharaoh did the same thing. These green friends were all over the place and so the king asked the two leaders to pray to God to get the frogs away from him and his people.

Moses prayed to the Lord to remove these frogs, every where else but the Nile river. This is to show Pharaoh what God is capable of.

Bodies of frogs piled up in the houses, farms and other part of the country, except for the Nile. And when Pharaoh sought relief, he didn’t let the Israelites go.

It was held in Goshen, the land where the Israelites live.

gods of Egypt: Hapi and Heqt (Frog goddess to Egypt; both related to fertility)

III. The Plague of Gnats

Summary: Aaron, by God’s command, struck the dust of the ground and throughout the land of Egypt the dust became gnats (a two-winged fly that resembles mosquito and typically forms in large swarms). The magicians couldn’t reproduce gnats using their secret techniques.

But Pharaoh still did not listen and no Israelites came out that day.

IV. The Plague of Flies

Summary: The Lord asked Moses to get up early and tell Pharaoh about the next catastrophe in the land of Egypt. There will be swarms of flies in every corners of Egypt except the land of Goshen where the Israelites reside.

No swarms of flies will cross the line and harm the people of the Lord. He made a distinction between God’s people and Pharaoh’s.

And so it did. Flies where everywhere. Inside and outside of their houses.

So the ruler of Egypt let them sacrifice to their Lord, but in one condition: do it in Egypt. Moses did not agree. People might stone them if their sacrifices were detestable for the Egyptians.

Moses asked the Lord to blow away the swarms of flies and so it did. But when the coast was clear, Pharaoh still hardened his heart, just as the Lord says.

No Israelite came out of Egypt.

V. The Plague on Livestock

Summary: Moses and Aaron warned the Pharaoh as before about the next disaster. Livestock from all of Egypt will die except for the Israelite’s livestock.

The plague occured and all the livestock of the Egyptians got sick and died. Not one of them remained. But the flocks of the Israelites were all safe.

Pharaoh investigated and confirmed nothing about a dead flock of the Israelites.

His heart was unyielding and still no Israelite was released.

VI. The Plague of Boils

Summary: Moses toss handfuls of soot from furnace in the presence of Pharaoh. It became fine dust and was scattered all of Egypt and caused festering boils (a skin disease caused by infection of the hair follicle) to break out on people and animals.

But no Israelite was affected.

The magicians couldn’t stand before Moses for they also have the disease.

Pharaoh’s heart would not listen and the Israelites remained in Egypt.

VII. The Plague of Hail

Summary: Moses warned Pharaoh to let his people go or else more plagues manifest in the land. (Exodus 9:14)

The Lord could have easily wipe out the people of Egypt but he spared them all to show His powers and so His name be proclaimed in all the earth.

He instructed the king to bring their livestock and everything they have in the field to a safer place, because hail will strike down everything outside and they will die.

Those who feared the Lord followed his command. But those who ignored the Lord left their slaves and livestock in the field.

Moses stretched out his hand towards the sky and the Lord sent thunder and hail, and lightning flashed down to the ground. It was the worst storm Egypt suffered. Every living thing outside of shelter was destroyed.

But the only place safe was the land of Goshen where the Israelites were.

Pharaoh said he will let them go just stop the hail and thunder. But the officials of the king did not accept (their hearts were also hardened just as the Lord told Moses). Zero Israelite liberated.

VIII. The Plague of Locusts

Summary: Moses and Aaron once again told Pharaoh about the coming infestation – the plague of locusts. They will devour what little was left from the hail, including every tree that is growing in the fields.

When the king knew that Moses planned on getting everyone on board out of Egypt, he was furious and prevented the freedom of the Israelites.

The plague occured after Moses stretched his hand over Egypt. East wind brought the locusts that devoured the greens of the country. They invaded all of Egypt in great numbers. Never before had there been such a plague of locusts, nor will there ever be again.

Nothing green remain in the land of Egypt.

Pharaoh confessed to Moses that he had sinned against the Lord and wished to clear the invasion of pests in Egypt. Moses prayed to the Lord and strong west wind swiped away the plague of locusts and carried them to the Red Sea. But the king’s heart was stubborn and the Israelites remained in Egypt.

IX. The Plague of Darkness

Summary: Moses stretched out his hand towards the sky and total darkness covered all of Egypt for three days. No one could see or move about. Yet the Israelites had lights in places where they lived.

Pharaoh will let the Israelites go but in one condition: the herds must remain in Egypt.

But Moses beg to disagree for they will use the herds and livestock as sacrifices to the Lord and to live.

The coldhearted Pharaoh said to Moses, “Get out of my sight! Make sure you do not appear before me again! The day you see my face you will die.”

Exodus 10:29 Moses replied: “Just as you say, I will never appear before you again.”

X. The Plague on the Firstborn

Summary: This last plague is to challenge all of Egypt’s deities and to Pharaoh, for he considered himself a god. (Exodus 12:12)

The Lord planned to bring one more plague on Pharaoh and on Egypt. This will make the king drive them out completely.

Men and women alike were commanded to ask their neighbours for articles of silver and gold.

The plague was predetermined that every firstborn son in Egypt will die at midnight. From the son of Pharaoh down to the son of the slave in the dungeon to the firstborn of the livestock. No one will runaway from the Lord’s judgement.

The Passover: The Israelites must take some of the blood from the lamb and put it on the sides and top of the doorframes of the houses where they eat lamb in order to save themselves. (Exodus 12:7)

Pharaoh and the Egyptians drove out the Israelites out of Egypt. For they feared for their lives if the people of the Lord still stay in their land for long.

36 The Lord had made the Egyptians favourably disposed toward the people, and they gave them what they asked for; so they plundered the Egyptians.

The story of the Ten Plagues (and other miracles such as drying up the water of the Red sea) spread outside of Egypt and many tribes feared the Lord of the Israelites. It was known that the God of Moses can do the impossible and will do His promises for His own people.

On the contrary, the gods of the Egyptians were impotent compared to the Lord of the Israelites. They didn’t manage to counter attack and outpowered the Lord. Not even to protect Egypt from the power of God.

The Works of Rahab

Wed Feb 3 , 2021
Rahab. People talk about Rahab as a prostitute. It was not hidden in the Bible that she was of the sinful people God was ready to wipe out. But how can an unclean woman in the eyes of believers today gets the attention of God and used her to save the Israelite spies? Let us find out how Rahab is People Just Like You. 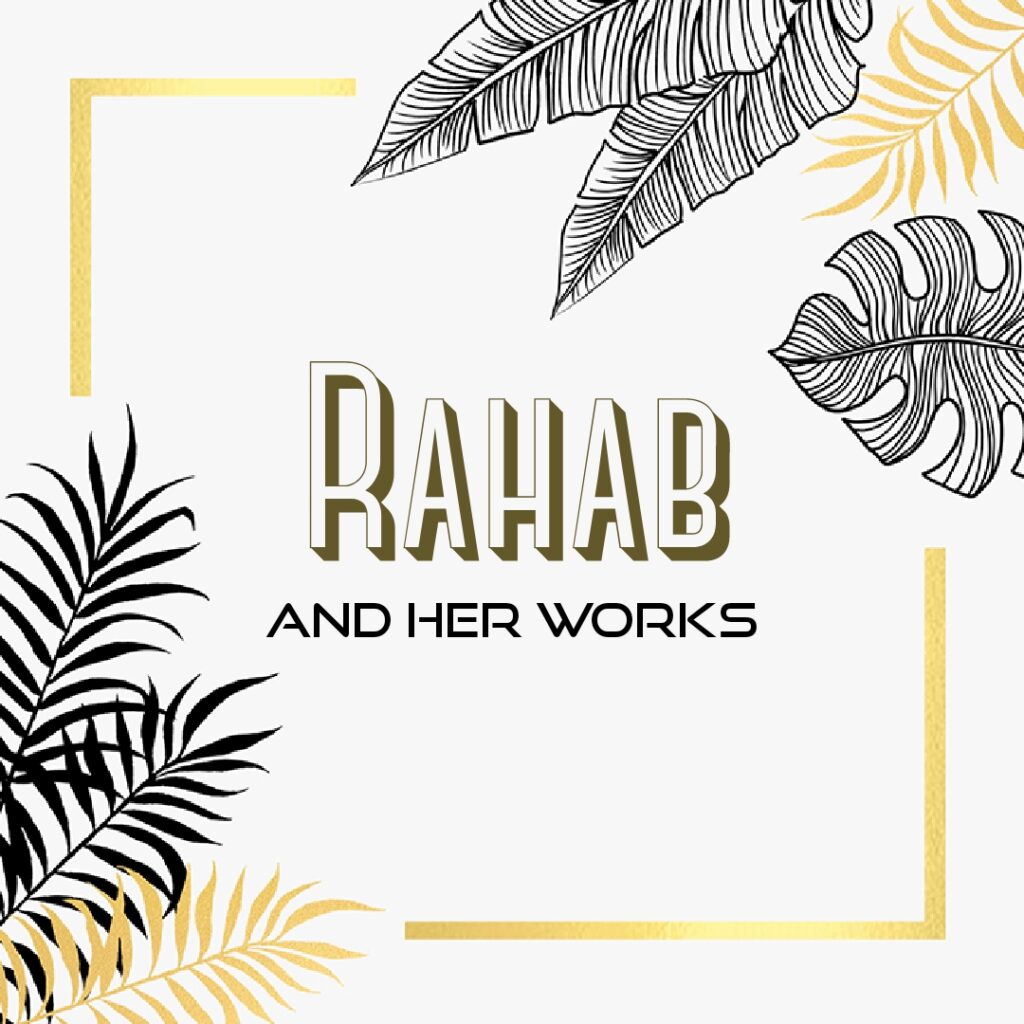